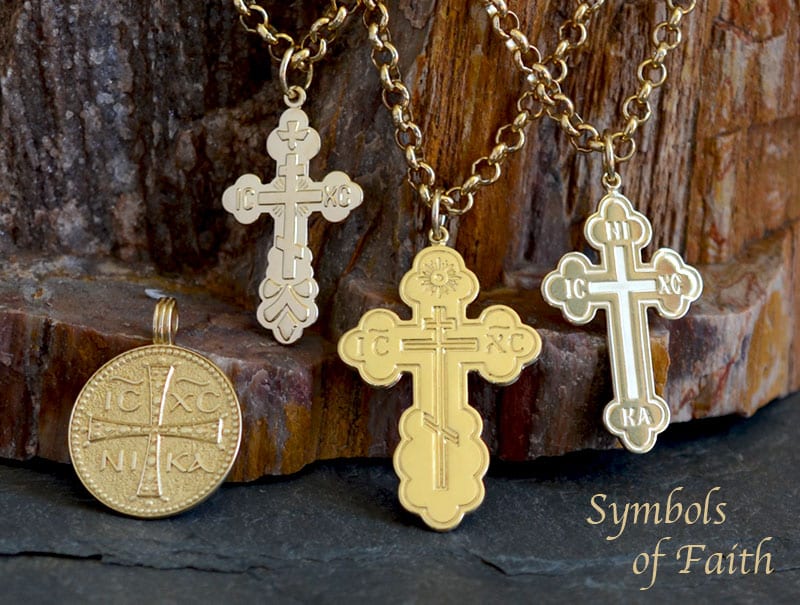 Within Christianity, the cross stands as a symbol of faith, strength, and protection.  But within the design of the cross, smaller symbols come together and convey an almost hidden message or “secret” meaning for the wearer to keep close to their heart.  Whether it’s a universally recognizable symbol like the angel or ichthus or a more diminutive anchor or dove, each recurring symbol has a purpose.  Each image has a meaning and acts as a symbol of faith.

“From antiquity, jewelry has had a powerful place in culture symbolizing, expressing, and unlocking the mysteries of life and the universe.  Gold and silver jewelry set with precious stones expresses and confirms religious conviction, ethnic identity, aesthetic appreciation, and social standing.

[We] wear crosses and sacred pendants close to [our] hearts as tangible signs of [our] faith[…]While this understanding of jewelry has been obscured in modern times[…]the discerning eye still yearns for the power and beauty embodied in jewelry of universal design and value.”

In this new blog series, we will be looking at some of these symbols, their meanings, and the histories behind them.

Want to read more from this blog series? Click on the links to read Part II, Part III, Part IV, and Part V. 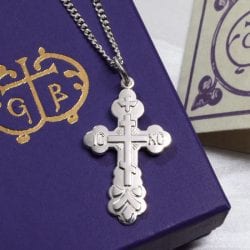 One of the most enduring symbols, the dove is a common symbolic theme across many cultures and time periods.

Most frequently, the dove represents the Holy Spirit, as related in the story of Jesus’ baptism.  “After Jesus came up out of the water, the [Holy] Spirit [of God] came from heaven and descended on him “like a dove.”” The descending dove, as seen on the top of our St. Xenia Cross (pictured right), symbolizes the Holy Spirit as well as the purity, peace, and rebirth associated with baptism.

The dove is also a key figure in the story of Noah and the ark.  Noah sent out a dove three times to see if the flood had receded.  “The third time, the dove did not return, and Noah knew that it was safe to leave the ark.”  Thus, the dove has come to signify a sign from God and an omen of hope. 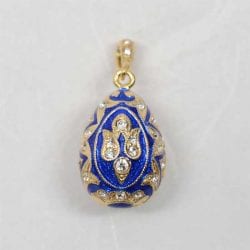 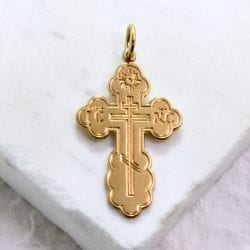 The sun is another symbol commonly found throughout Christianity.  While the sun, literally, provides light for the earth, the sun in Christianity represents Jesus as “the light” and the “Sun of Righteousness.” As the sun, he is the light that guides and enlightens.   In English, this connection between Christ and the sun can be seen as sort of a play on words – the “son” of God and the “sun” in the sky.
..
The sun can be seen depicted at the top of our St. Olga Cross.  It is a symbol representing the light of Christ, illuminating the cross below it.
..

The most common Christogram in Eastern Orthodoxy, “IC XC” is a prevalent abbreviation derived from first and last letters from the Greek words for Jesus (IHCOYC) Christ (XPICTOC).

This lettering appears in many Slavic designs, like our St. Olga Cross and St. Xenia Cross (shown above) or St. Job Cross.  The Slavs had received Christianity from the Greeks in 988 and retained the IC XC abbreviation.

It also appears as a hand gesture in numerous icons, with the pinky finger representing the “I,” touching thumb and ring finger forming the “C”, and middle and pointer fingers positioned to form an “X.”  This gesture has been adopted by clergy when giving blessings.

Interestingly, there is further symbolism hidden within this gesture.  “[T]he three fingers of Christ – [which spell] out “I” and “X” – confess the Tri-unity of God: Father, Son and Holy Spirit. The touching finger and thumb of Jesus not only spell out “C”, but attest to the Incarnation: to the joining of divine and human natures found in the body of Jesus Christ.”

IC XC is often accompanied by the Slavonic letters for the word NIKA, borrowed from the Greek word meaning “victory” or “conquer.”  NIKA is, of course, derived from Greek mythology’s Nike, the goddess of victory.  “IC XC NIKA” can be seen juxtaposed with the Justinian Cross on the reverse of our Christ the King Medallion and on the trefoil budded ends of the arms of our Greek Baptismal Cross.